Talk about all other types of guitars. Jazzmasters and basses go here!

I picked this up in a trade a few days ago. I already have a T486 with SD Phatcats in it and have been on the look out for a humbucker version. Something I can take out with me in place of my 335 and not worry about bashing it about a bit. But if the same quality. The 486 has spec’d up pickups/wiring/pots/switches compared to the 386 as standard. Luckily the previous owner of this has already fully upgraded everything, including installing a set of Area 59 pickups (from crazyparts.de). That was a total bonus as my 335 has the MHS2 pickups, so a decent match to ally.

I think Eastman are easily the best bang for your buck guitar out there. All hand made, nitro finishes, ebony fretboard. Best of all the jumps in models/prices that actually match the increase in the value of the parts used.

Compared to the Gibson 335 these have a slightly wider neck that’s not as chunky (kinda like a PRS). 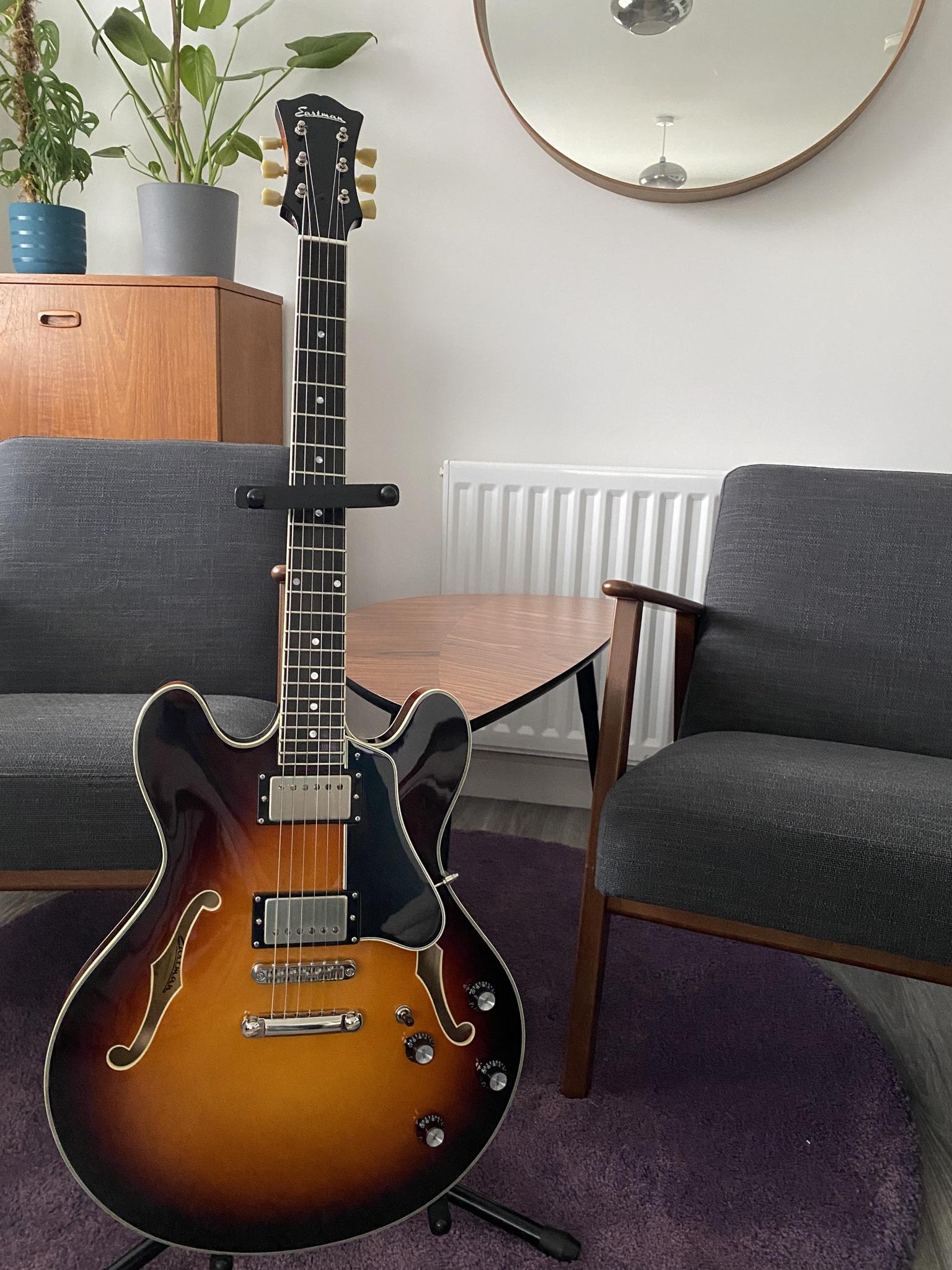 well that is a handsome thing
Top

Awesome looking guitar. I've read a lot of good reviews of Eastmans. At the same time they are quite pricey for guitars that are made in China. An Eastman Junior costs as much as a Gibson. I'm not sure whether the price is justified

That does look very nice

plopswagon wrote:I like teles and strats because they're made out of guitar.

robroe wrote:I dont need a capo. I have the other chords in my tonefingers

sunshiner wrote: ↑Mon Dec 20, 2021 5:52 pm Awesome looking guitar. I've read a lot of good reviews of Eastmans. At the same time they are quite pricey for guitars that are made in China. An Eastman Junior costs as much as a Gibson. I'm not sure whether the price is justified

To be honest I own more Gibson than Eastman. I honestly think the Eastman stuff is as good. It’s certainly WAY better than most of the other options (I’ve tried a lot, the best of which before Eastman was probably D’Angelico, tho they are sorta like a nicer Epiphone).

If you but any Eastman preowned too the prices are often amazing.

Hand crafted old school in Beijing. They make violins too (they did that before the guitars). Sorta reminds me of the old Gibson shop that became the home of Heritage. Or when Gibson Memphis made all their semi/hollow bodies. There’s a studio tour online too.
Top

I have an artist relationship with Eastman and currently own 5 + 1 on order, but have owned more than a dozen (and the ones I no longer own are mostly with friends). You can not compare the made in china label that gets thrown around to these guitars. All hand crafted by people trained to the level to make world class violins. My E10ss (a j45 copy) is every bit as good as any j45 you are going to find new in a store and better than 90% of them. Is it a vintage one. No. But neither are the new Gibsons.

Price wise for example.. Yes. You can get a Gibson Jr for about the same price of an Eastman Jr. BUT the Eastman is more comparative to the Gibson Historic series which is 2-3x as more... Not the run of the mill. The Les Pauls (especially the V series... but all really) are more along the lines of a historic series as well. Yeah, they are 2500... But the comparative Gibson is 4-5K.

Even better.. My main stage guitar now is a PCH-3 GACE. Super cheap guitar (in fact at my artist cost I paid less than 200 for it with an L&R Baggs system installed in place of the stock FIshman). I love playing it. Live it sounds and feels great.. Now if I am recording I would pull out the E10ss or the AC520CE that I have (the AC is more a Taylor sounding dread)

Fortunately for me, I live about an hour from their main USA import facility and the custom shop (Pomona, Ca)so I get to get to go there, meet the guys, pick up a guitar, etc. I can't say enough about them. Do they have a bad apple every now and then. OF course. So does PRS. Hell I played a 6K Collins acoustic a few weeks ago I wouldn't pay 500 for.
They say great minds think alike....Sometimes we do too...
Top

You said that far better than my attempt, thanks. I know you get a lot of people who buy a guitar, say an Epiphone and they say “it’s a Gibson killer!’ That’s usually partly new guitar excitement, but it might also actually be the best guitar that person has owned. A lot of those folk have never owned a Gibson. The Eastman guitars are the first ones I’ve owned where I was genuinely flabbergasted by the quality. I actually own a Gibson 335, and it’s a really good one too. The Eastman t486 is honestly as good (maybe even better) it is technically higher spec too (ebony board, parallelogram inlays, bound headstock).

I took it to a recording session a couple of months ago and two of the other guys who also play guitar tried it, and subsequently purchased one. One bought his to have a 335 he felt he could take around with him without worrying about it constantly (he’s a pro and has a lovely vintage one). For the amount of these I’m going tonend is selling for Eastman, I should be getting promo prices!

If you see one in your local shop, get it off the wall and give it a go. Same here. I had hears stories about Eastman Guitars from some friends but neve played one. I emailed their USA customer service contact (not knowing they were near me) just to ask about a shop that was semi local to me that carried a selection of them. All I could find was s hop that had 1, maybe 2 and were like 90 minutes away. The called me back and asked me a few questions and then invited me up to the warehouse and I got to meet the custom shop head luthier and a bunch of the staff and play probably 15 guitars. I actually got to play their 1st prototype Les Paul and Jr that day. Every guitar I touched was amazing and some came straight out of packing boxes so not set up magic or anything like that... Just great guitars and a great group of people. Since then (probably 4+ years ago now) I have been a huge fan and have an artist deal with them (even though I am not on their artist page... Which makes sense as I am just primarily a local/regional cover band front man singer/strummer). I am just your average working musician... And they have taken care of me every time I have asked for something. Even donating a couple guitars to me over the years for charity events.
They say great minds think alike....Sometimes we do too...
Top

Had a craving for an ES-335 type for a while. Bought the T486B a month back, when GAK were discounting them sharply. Wonderful guitar!

ekwatts wrote:
If you really need those extra harmonics then play a fucking sitar.

A wee video of a Gibson Vs Eastman review if anyone is interested.
Top

great discussion on the Eastman vs Gibson guitars. I had that exact les Paul model. Easily the nicest electric I have every played. Wish I didn;t have to move gear earlier in the pandemic.
They say great minds think alike....Sometimes we do too...
Top

The double cut Jr they do looks amazing!
Top

Yeah the Fabre hardware and Lollar pickup is a nice addition too.

My inner miser still balks at paying a grand for a Junior tho.
Top
Post Reply
14 posts • Page 1 of 1

Return to “All Other Guitars”